You’ll Never Get Bored Playing These Games For Grown Ups Hanging at home with friends can be a lot more fun when you have the right games on tap. Don’t just sit there with your squad staring at your cell phones. Liven things up with some healthy competition and some real-life interaction. Whether you’re into strategy, trivia or just making a fool of yourself, everyone goes home a winner with these games for grown-ups.

If you’re an Ellen fan, then you already know how this game works. You rock a headband and race against time to guess the word on your forehead while your teammates shout clues in your face. Choose from three categories on the companion app and others like Dynamic Duos, Act It Out (think charades), Superstars (a celebrity guessing match) and Hey Mr. DJ when you can only hum the clues to a song.

How many players: Up to 6

What Do You Meme?

If you’re not following @fuckjerry on Insta why check in with the gram at all? Channel that creative meme magic with this game brought to you by the Fuckjerry team. Get social for real with family and friends while captioning photo cards to complete the meme. Best caption decided by a rotating judge wins, and hilarity ensues.

Age: Adults with a sense of humor

Game Of Thrones The Trivia Game

If you consider yourself a diehard GOT fan, you'll want to make a run for the Iron Throne with this trivia game based on the HBO hit series. With over 1200 questions you can keep your game spoiler free by organizing by season. Test your knowledge of the Seven Kingdoms on everything from Valyrian steel to dragon eggs while conspiring with other players to win control over different locations. Winter is coming.

Age: If you’re mature enough to watch the show you can handle this non-nude game.

How many people: Two to four players or teams.

This best selling party game is embarrassing and awkward as it is fun. One player asks a question from a black card an the rest of the party answers with their most despicable and funniest white card. It's pretty simple, but the official rules are undoubtedly worth a read.

Age: Perfect for inappropriate people ages 18 and up.

How many players: This is an excellent game for a big group, but you need at least 4 people with 6-8 being ideal. 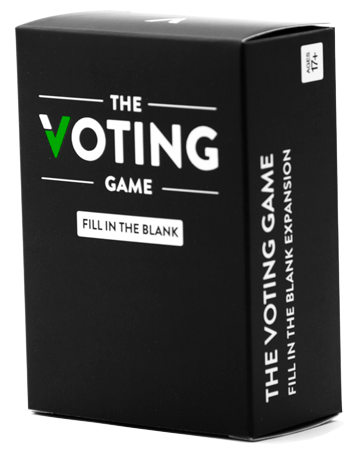 Wondering what your friends really think of you? The truth won't hurt while playing this game. Pick a card, read the question and vote. There are 160 questions like "Who's Google search history would you most like to see? And, Who would have the hardest time talking their way out of an insane asylum?" Players vote anonymously, and the numbers are tallied. Would your squad nominate you "most likely to lose an election because something you've done in high school"? Let's see!

Age: Depends on whether or not you expand your deck with the new NSFW (not safe for work) cards.